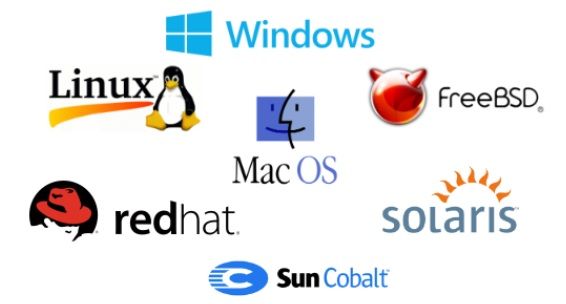 At the user level of a PC, we can say that there are two types of Operating Systems: OS for PC and OS for Mobile Phones.

But there is also a wide family of operating systems categorized according to the types of computers they control and the type of applications they support. The 4 categories for this type of OS are: Real-time OS, Single User Single Task, OS Single User Multitasking and Multi-User OS.

Let’s look at the different types one by one.
PC Operating Systems
The operating systems for PC or desktop computers are varied and there are many, but the most used are Windows, Mac and LINUX. Here we leave you an image with the most used OS for PC

The use of windows is the flagship of the Microsoft operating system, the Windows, standard system for personal and business computers. Introduced in 1985, it was largely responsible for the rapid evolution of personal computing.

Mac OS is the Apple Macintosh operating system for personal computer lines and workstations. The apple is your logo.

Linux or GNU / Linux as an operating system was designed to provide personal computer users with a free or very low cost alternative. Linux has the reputation of being a very efficient and fast system. There are many different versions, the best known are Ubuntu or Fedora. The versions can be modified freely by any user.
Mobile Operating Systems
The most used mobile and tablet operating systems are Android and iOS, but you can see more in the image below. If you want to know more about these operating systems, here is a link: Mobile Operating Systems.

OS According to the Computer and the Type of Applications

Of this type we have:

– Unique user, unique task: as the name implies, this operating system is designed to manage the computer so that a user can do one thing at a time.

– Single user, multitasking: this is the type of operating system that most people use on their desktops and laptops today. Microsoft’s Windows and Apple’s MacOS platforms are examples of operating systems that will allow a single user to have several programs running at the same time.

It is also important to know if your operating system is 32-bit or 64-bit. It is a common question they ask you when downloading software. Below you can see how to know if your computer is 32bit or 64bit in Windows.